The perfect description of an incident with fire will make your readers feel more engaged and appreciative of your writing. However, finding the best words to describe fire more pleasantly and vividly can be a tough process.

Here are some examples of words to describe fire that will help you make the best out of your descriptions of fire.

You will want your readers to create an image in their minds when it comes to how the flame looked. You can consider using any of these words to describe fire.

E.g. “The languid flames struggled to stay alive in a pile of bricks that were laying in the back part of his house.”

Flames can, at times, get languid when they lack power. This word means that the flames are often only lit a little bit. 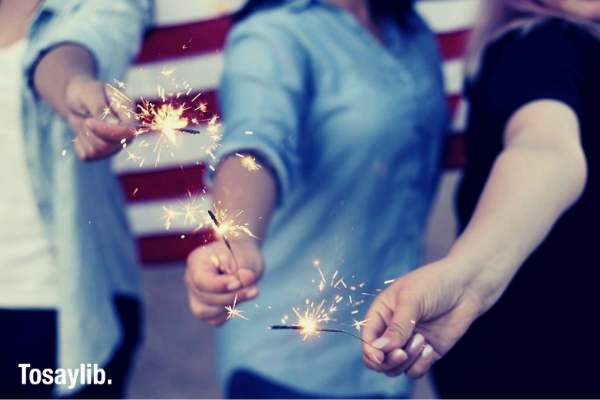 E.g. “The fire was extinguished, but the pyrotechnic flames kept on blazing. The victims of the home fire were just shocked.”

Pyrotechnic flames often create a big blaze, and it almost looks artistic. There is a similarity with the way in which fireworks light up.

E.g. “I could see how each of them struggled to get the piece of meatloaf from the forked flames of the campfire.”

When you describe flames as forked, it means that the blaze has divided into two or more branches.

E.g. “They quickly kept moving from one point to another, escaping the menacing flames that caused one of them to get a blister.”

Menacing flames can cause a lot of harm because the word refers to the fact that the fire looks threatening. Therefore, when it’s not controlled, it spreads unevenly and quickly. 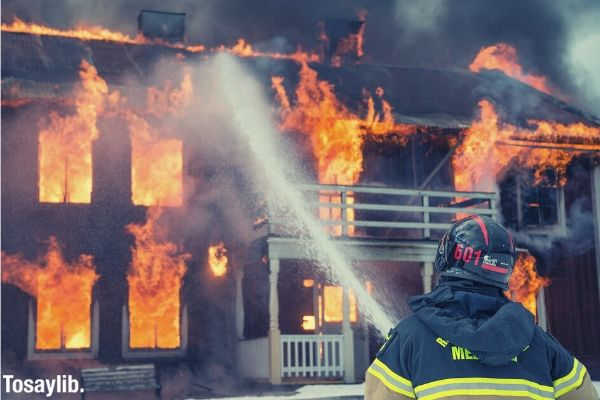 Photo by Daniel Tausis on unsplash

You can let your readers have an experience of how fire can blaze with a lot of heat using these following words to describe fire.

E.g. “It was the beginning of the end for the school buildings when a lethal blaze started in the furnace room.”

You can use the word lethal to describe blazes that cause harm and destruction to anything with which it comes into contact.

E.g. “The infernal blaze set everyone on a rampage in the park. No one could afford to stay back and help it stop from spreading.”

Blazes from a fire can become unpleasant and dangerous very quickly. In this case, you can use infernal to describe the blaze. 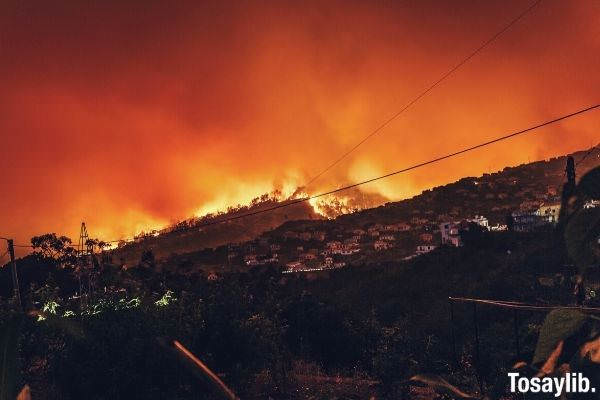 E.g. “Battling the ineffectual blaze by the fire crews was one steep mountain, and it cost them the life of one victim.”

When a blaze gets too much out of control, it becomes futile; in this case, you can use the word ineffectual when the effort to control it is not working.

E.g. “The green grasslands of the savanna are now left in ashes after a devastating wildfire.”

You can use devastating to describe wildfires that spread quick, often burning natural vegetation extremely quickly. 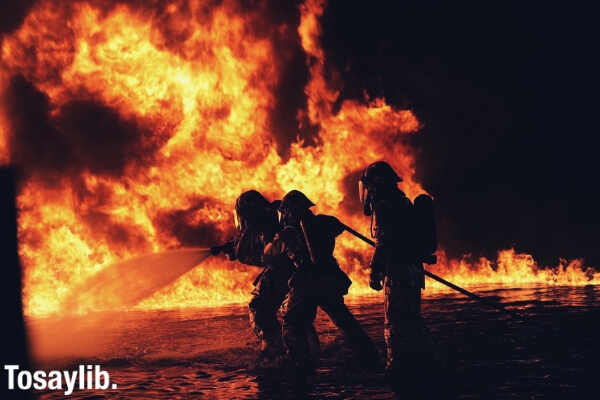 E.g. “More than a hundred houses burnt down due to the frantic wildfire caused by a gas leak. Many people have been left homeless, and some people have even lost their lives unfortunately.”

Frantic describes a wildfire that is out of control and spreads fast over large areas without any specific trajectory.

E.g. “The campers were left gazing from a distance after several attempts to put out the unstoppable bushfires.”

When you cannot stop or prevent the spread of a brushfire, then you can describe it as unstoppable. 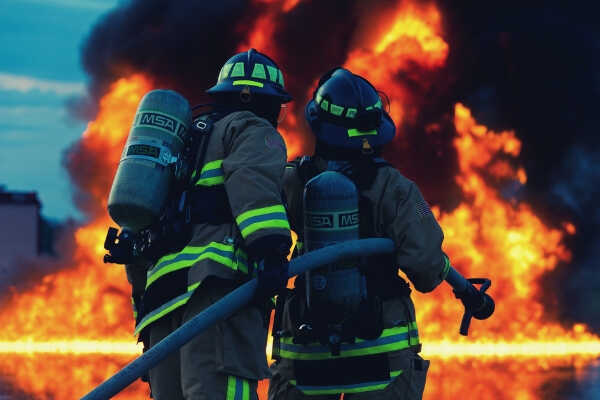 E.g. “It has come to the attention of the state that there is a constant spread of the electric wildfire; it has prompted me to declare a wildfire emergency.”

Electric describes wildfires that cannot be put out with ease; they are often deadly.

E.g. “The sounds of metal kept ringing in our ears as the graphic wildfire took over our cabin house within just a few minutes.”

A graphic bushfire is violent because it spreads and burns everything on sight within a very short time.

E.g. “Minutes after trying to call the fire brigade, the blaze from my neighbor’s room turned into a galactic wildfire that spread to other houses.”

You can describe a wildfire as galactic when it covers a greater landmass than imaginable. It changes significantly from how it was at the beginning to how it is at its moment intense moment. 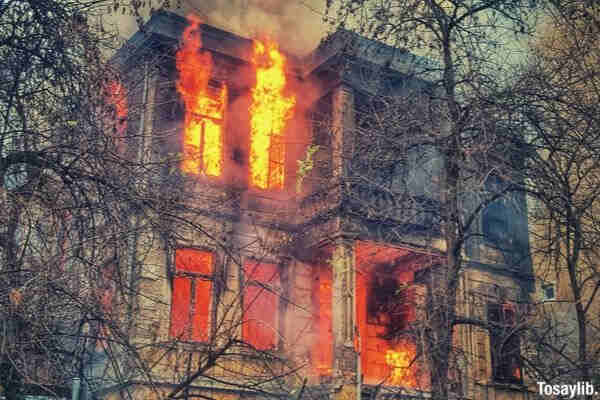 Photo by Chris Karidis on unsplash

Words for smoke (caused by fire)

Smoke comes in different forms and smells; you can describe this to your readers using the following words to describe fire.

E.g. “The grisly road accident left two vehicles on fire with black, harsh smoke spiraling towards the sky. It was obviously the burning tires.”

You can use harsh to describe smoke that suffocates you. It is extremely unpleasant and can be very severe.

E.g. “She tried pouring some water on the fire to save her last memory of him, but all of the pictures were burnt down. The smoke was smoldering all that came out.”

When you put out a fire, and the smoke still comes out without seizing, you can call it a smoldering fire. 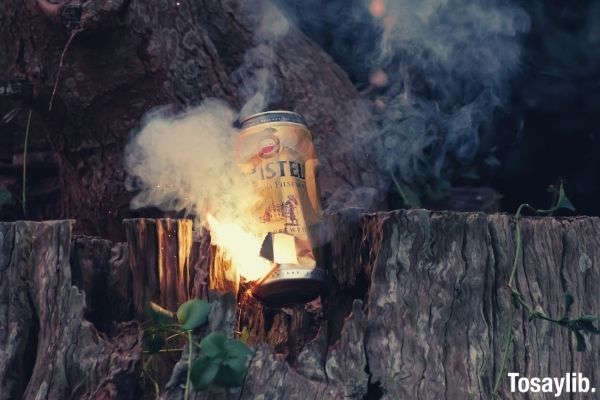 E.g. “The rampaging smoke from the burning houses fogged up the air. It caused me to walk through the benches in the park, injuring my leg at the same time.”

You can describe smoke as rampaging when it gets too much in the air, and you cannot see what is in front of you.

E.g. “Dense smoke in the alley blocked my vision; I tried to save my life from the rising blazes of fire.”

Too much smoke that blocks you from seeing anything can be called dense.

Words to describe sounds of fire

You can try bringing out some sound effects of fire using the following creative words to describe fire in your writing.

E.g. “Walking in the forest was one hell of a trial, but the idea of going past the roaring fire was also a suicide attempt.”

Roaring describes a fire that burns with many flames, and the heat that it releases is too much to handle. 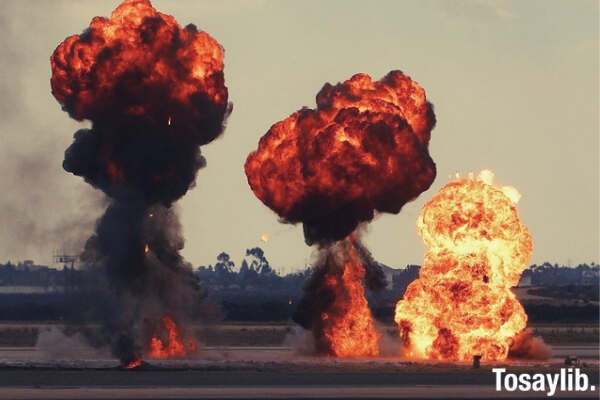 E.g. “The spectacular sight of horses running through the fields was cut short by the crackling fire that sent them into a frenzy .”

Crackling describes a fire that makes short and sharp cracking noises due to the burning of small branches.

E.g. “Comparing the hissing sound of a snake and the sizzling of the fire at the camp was quite hard.”

You can describe the fire as sizzling when it is hot and burns with a hissing sound, like the sound a snake might make. 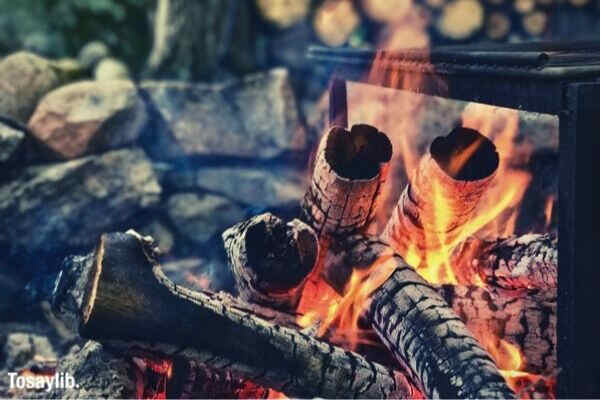 A fire that burns unevenly produces a sputtering sound, which is because the particles are emitted by the force of the fire’s energy.

E.g. “Finally! The snapping of fire finally made the thieves run away, leaving us to walk free from the robbery.”

You can describe fire as snapping when it bursts out loudly, producing a sharp sound that is often quite disruptive.

Words to describe the smell of fire

Here are some words that you can use to describe the different smells that are produced from fire’s smoke.

E.g. “The fire created a pungent smell that spread through the air, leaving people with symptoms such as severe migraines.”

The smell of a fire burning something toxic produces a pungent odor that you can describe using this word.

E.g. “Down by the beach while having some mellow vibes; the fire is burning through the air, and it’s providing scenes that any beach lover would want to see.”

The mellow smell of fire is pleasant and soft; it may have a rich flavor of different smells; it may even smell good over time. 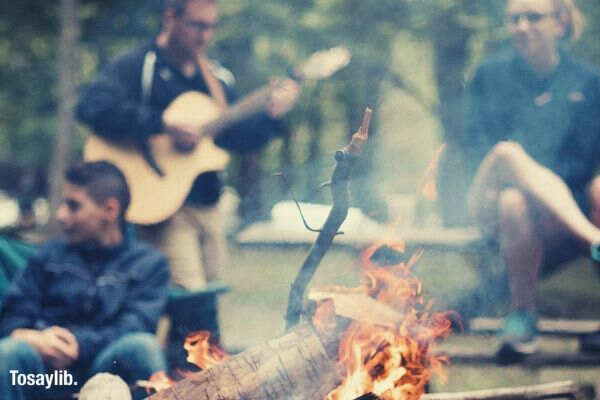 E.g. “The trash collectors never smell the same odors we do because they are protected. The odor of the fire is just acrid each time they place the city’s garbage on fire.”

Acrid is the best word to describe the smell of fire that is sharp and produces an almost toxic smell.

Words that describe fire make it easier for you to explain to your readers how intense and dense the fire was.

You also let them picture how it looked, smelled, or sounded. You can use the words to describe fire above in your next novel, article, or blog about an incident with fire.