War is something we all dread, as its impacts are deadly and long-lasting. Most words to describe war have negative connotations as a result.

War can be described in many ways, from the destruction of the conflict zone and the death involved, to the pain and suffering people endure. Others use words to describe the smells and sounds to highlight the horrific realities of war.

The horrors of war can be a difficult thing to describe. Yet, we believe these 28 words to describe war help paint a vivid picture of the terror and suffering that take place in the conflict zone:

6 words to describe the destruction of the conflict zone

Property damage is one of the most common features of wars. It leaves people displaced, jobs are lost and infrastructure is threatened. Sometimes, people are able to rebuild, but for many people, the devastation is overwhelming and the conflict zone has to be abandoned.

Use these words to describe war destruction and damage:

When something is annihilated, it is destroyed completely. This is good to use after bomb and rocket strikes that can level buildings or entire towns. It says that the damage is beyond repair, and all is lost.

“While most residents were able to flee to the border, the city could not escape the annihilation from the airstrike.” 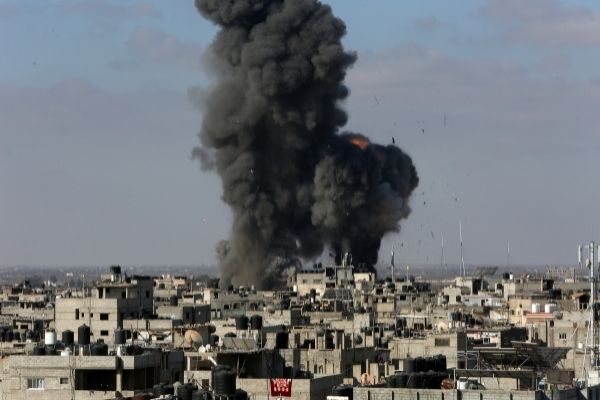 Photo by Anas-Mohammed on shutterstock
02Catastrophic

Catastrophic describes something that is sudden and destructive. It causes a great change to what was there before and leads to the suffering of those within.

“The town was awakened by catastrophic damage to infrastructure, and the blares of alarms signaling danger.”
03Crisis

When something is in a crisis, it is on the brink of complete devastation. Here, the danger is imminent and it signals the hardships to follow.

“As the city was in crisis, the mayor declared a state of emergency to salvage what was left.”

20 of the Best Words to Describe a Storm in Writing

Downfall refers to a loss of status, power and prosperity. This relates to conflict zones that are conquered or defeated.

“No one had imagined the downfall of the great city, and perhaps this was the greatest mistake.”
05Havoc

Havoc may be used to describe widespread destruction. It means no area was spared, and all were devastated.

“The havoc wreaked by the enemy was evident in the state of the buildings.” 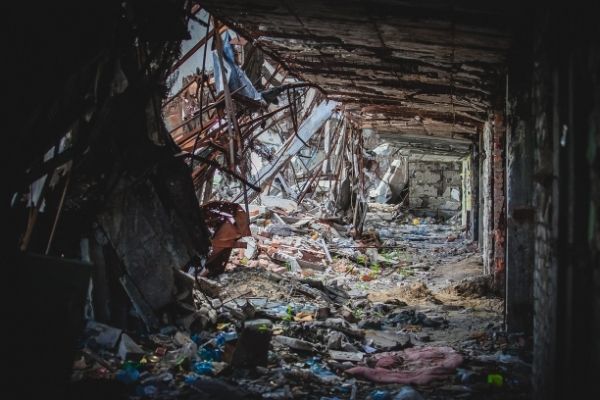 Senseless refers to something that does not make sense. In terms of the destruction of the conflict zone, it means that the destruction was needless or pointless, with time, effort and resources having been wasted.

“As the citizens rummaged through the senseless damage, they couldn’t help but break down in tears from what had been lost.”

6 words to describe death in the conflict zone

“Whatever the cause, these words to describe war should do the trick:”

This describes a scene where there is a lot of blood. It can be from bodies lying around, injuries to people who have since been moved, or helpless animals. Blood is a good indicator that something disastrous has happened and is a common scene in war.

“The bloody schoolyard highlighted the ruthlessness of the enemy and their willingness to do whatever it took to secure a victory.” 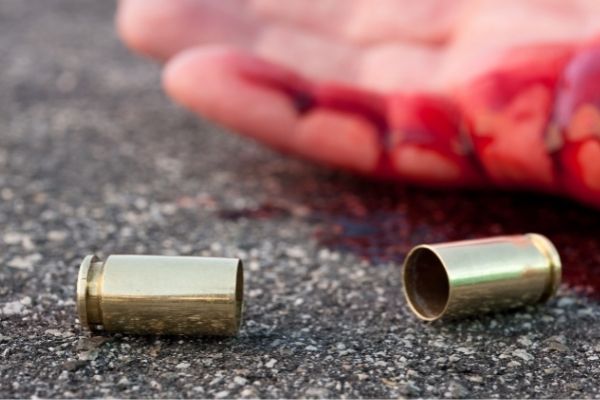 “The videos emerging from the warzone showcased the pure carnage of the wars raging in the East.”
09Cruel

Cruel may be used to describe how people met their death, such as torture, execution or other horrors of war.

“Innocent citizens met a cruel end at the hands of the rebels.” 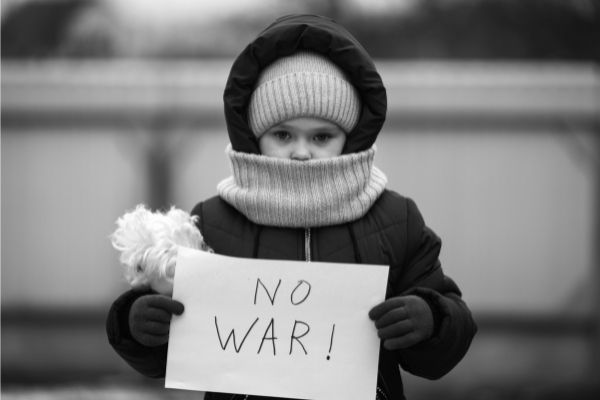 Use genocide to describe death when a specific group of people sharing the same characteristics is targeted. A popular example is the Holocaust, where Jewish people were subjected to slow, painful murder.

“The genocide of the native population means a loss of culture and history.”
11Horrific

Horrific is best used to describe the optics of the situation. In other words, the deaths, along with the destruction, are hard to look at and acknowledge because of their shocking and monstrous nature.

“Where is the humanity?’ she shouted, as she was forced to look at the horrific images of bodies strewn about the streets.”
12Unprecedented

Use unprecedented if this is something that has never happened in that area. In other words, the conflict zone has never seen that level of death and destruction before, and the tragedy will certainly make the history books.

“The death and destruction experienced were unprecedented. It was as if a nuclear bomb had gone off and the residents were unsuspecting.” 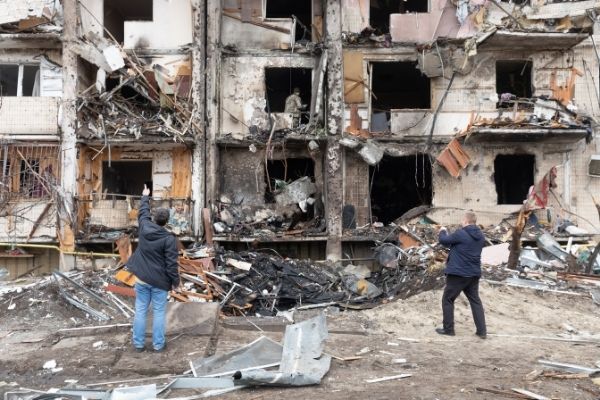 Photo by Drop of Light on shutterstock

During war, emotions are intense and at an all-time high. Pain and suffering dominate the minds and lives of people as they try to escape the conflict zone and get to safety.

Here are some words to describe war and the pain and suffering endured by the people caught in the middle of it:

Anguish refers to a state of severe mental and physical suffering. In other words, this word describes feelings of torment, grief and woe.

“The anguished faces of the refugees speak volumes of the suffering within the war zone.” 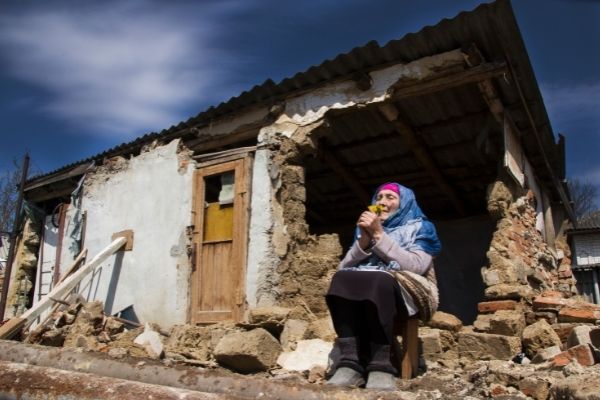 Defenseless may be used to describe ordinary civilians with no means of protecting themselves who are left completely vulnerable to what is happening. This can cause both mental and physical strife, and lead to feelings of hopelessness.

“Left defenseless, and with no direction, the citizens had no choice but to flee underground and wait for the shelling to stop.”
15Despair

Use this to describe feelings of sadness, hopelessness and mental suffering. This is a result of being scared, with no clue of how to escape the nightmare. 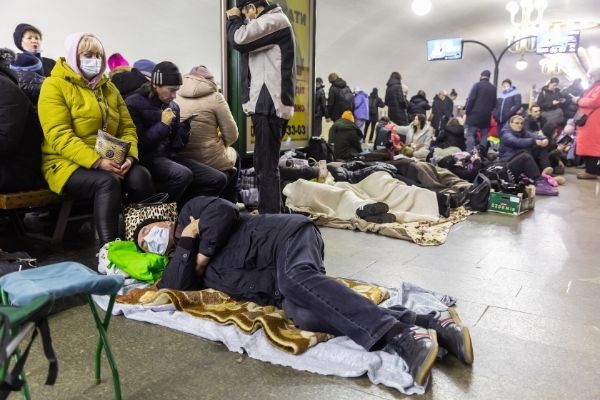 Photo by Drop of Light on shutterstock
16Excruciating

This word is generally used to describe physical pain and suffering. It refers to the intensity or severity of the feelings.

“The prisoners experienced excruciating pain as their captors tortured them for questions they did not know the answers to.”
17Hopeless

“It wasn’t long until they realized their efforts were hopeless, and they would soon be overpowered by the enemy.” 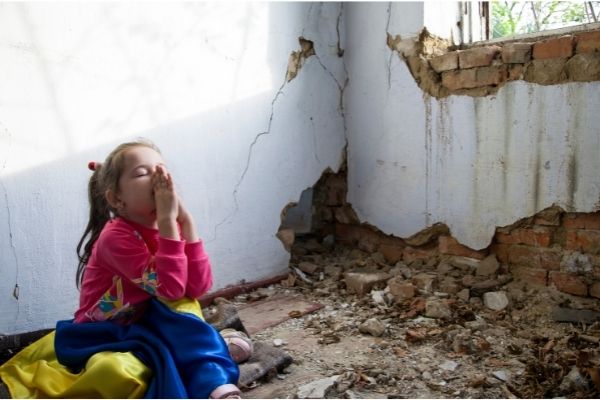 The term horrendous may be used to describe wartime feelings for civilians. It is synonymous with ‘dreadful’, ‘horrible’, ‘fearful’ and ‘bad’.

“The conditions after the war were so horrendous, people had to flee the area for a better life.” 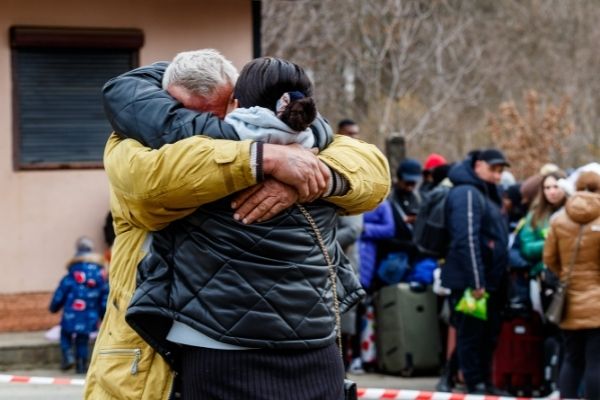 Use mayhem to describe the chaos and disorder experienced before, during and after the fighting. It means society and the infrastructure are in a state of complete disarray, and there’s no obvious chain of command.

“Mayhem ensued after it was discovered the President had died, and the higher-ups in the military were held prisoner.”
20Vicious

Vicious can be used to describe the savage or dangerous conditions under which people are forced to live and operate because of the war. It can also describe the actions of the enemy and the harsh measures taken to ensure victory.

“No one was prepared for the vicious nature of the enemy soldiers and their orders to prosecute citizens.”

25 of the Best Words to Describe the Almighty Sun

8 words to describe the sounds and smells of war

People traumatized by war will tell you that the sounds and smells of war stay with them for years after they reach safety. Here are some words to describe war that are appropriate to use:

Booming can refer to the sounds of bombs dropping or explosions. This is one of the most dominant sounds in war, besides gunfire and screaming.

“The villagers were petrified in their tracks by the booming sounds of the war raging in the distance.”

Photo by Orlok on shutterstock
22Chilling

Chilling may be used to describe sounds of war that cause people to feel fear without necessarily seeing the source. This can be anything from the sounds of approaching gunshots to the horrifying sounds of people screaming in pain or fear.

“She hid underneath the table with her hands over her mouth as the chilling sounds of an automatic rifle neared her hiding spot.”
23Piercing

Use piercing to describe sounds that stand out among others or are very loud and command attention. This can also be used to describe overwhelming noises that are sharp and unpleasant.

“As soldiers on both sides called for a ceasefire, the piercing sounds of a woman wailing brought shivers down their spines.” 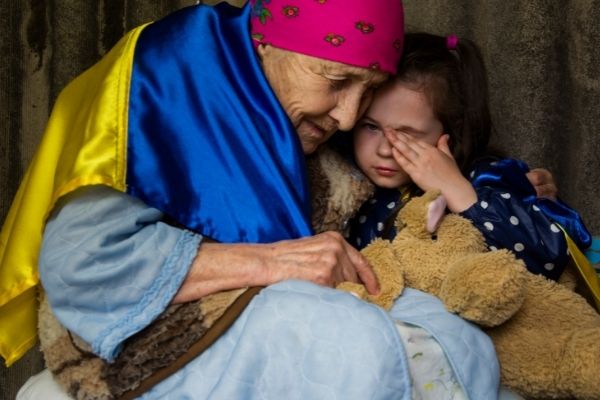 The word rumbling describes a deep, resonant sound that gets louder as it approaches the listener. It can cause objects to shake and fall, and can be likened to the sound of thunder.

“Sleepy residents were awoken by the rumbling sounds of tanks racing through their neighborhood.”

Burning is expected in wars as things explode and are set on fire. The smell of something burning dominates the air and can travel a far distance, leaving an entire area marked with the stench.

“The air was marked with a burning odor for days after the last bomb was dropped.” 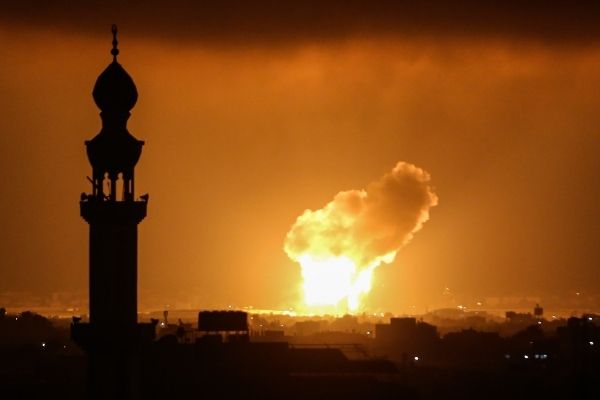 Photo by Anas-Mohammed on shutterstock

Nauseating may be used to describe unpleasant odors that cause people to feel sick to the stomach. Common culprits are the smell of blood, decomposing bodies and noxious gases/fumes.

“No matter how strong your stomach is, you cannot escape the effects of the nauseating odor of unburied bodies strewn about the battlefield.” 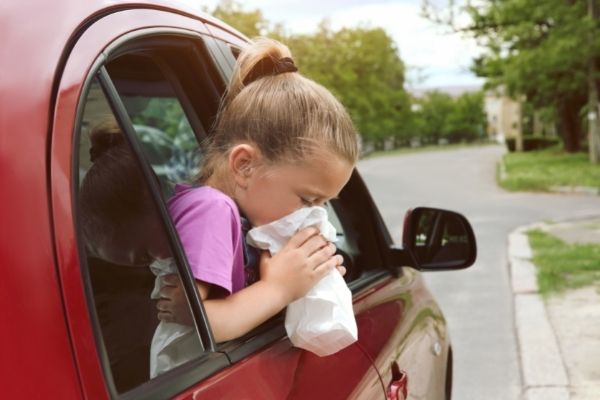 Use pungent to refer to odors that are sharp and overpowering. In other words, the smell is strong or even suffocating.

“The pungent smell of sulfur lingered through the streets and camps.”
28Rotting

The smell of something rotting is unmistakable, and in war, it’s usually from people or animals that were caught in the crossfire. It can be used to describe the smell of death.

“There was no one left to do the dirty work, so the rotting odors were left to nature to resolve.”

War is miserable, cruel and unconscionable. It is a brutal, savage event that leaves permanent scars on the land and the people involved for generations.

This list of words to describe war barely scratches the surface of the realities and hardships of war. However, they should be sufficient to paint a picture for your readers.