Who doesn’t love ice cream, after all, it’s one of the world’s favorite desserts?

While you’re enjoying your ice cream, you may start to think about some words to describe ice cream to explain your experience to others.

Instead of using the actual flavors as words to describe the ice cream, how about describing the look or even the feeling you get?

Keep reading to learn 25 of these words to describe your ice cream treats:

What most people love about ice cream is its taste. There are so many flavors to pick from, some that you’d never even imagined possible.

Admit it, not all ice cream tastes the same. An ice cream from brand A will taste a bit different to one from brand B, even if they are the same flavor.

The difference is the quality of ingredients, and where they are inferior, often they will taste “cheap”.

E.g. “I’ll stick to my [insert name of brand]; it might be a bit more expensive, but this tastes so cheap!” 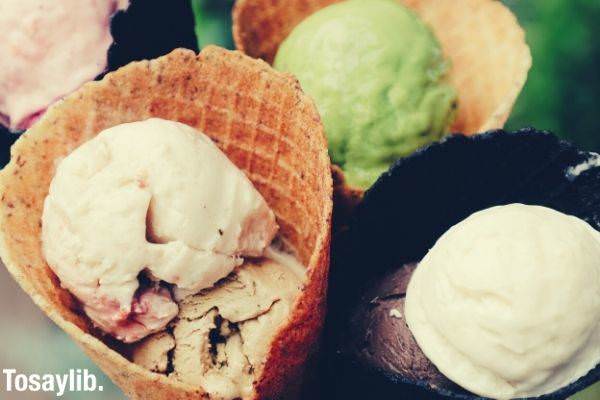 Chocolate-based ice creams are a fan favorite and they are extremely versatile.

E.g. “I’m weak for the chocolatey flavor of this ice cream. My personal trainer will be so disappointed.”
03Bitter

Ice cream is “supposed” to be sweet right? Well, some flavors are naturally bitter because of their ingredients.

Bitter is a good word to use when your ice cream has a sharp taste that is not sweet, salty nor sour.

E.g. “It’s more of an acquired taste, but bitter orange ice cream is my favorite flavor ever!” 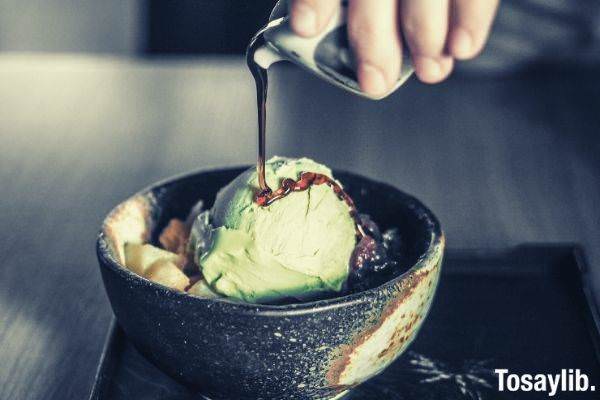 Delectable is a good word to use when you aren’t quite sure how to describe the taste, but you just know you like it. The word means delicious.

E.g. “I was craving something sweet, and unexpectedly stumbled on the most delectable pint of ice cream in the store last Thursday”
05Exquisite

Ice cream with rich flavors and high-quality ingredients may be described as exquisite.

It means that it is pleasing to your tastebuds and was well made.

E.g. “You have to try this butter-pecan ice cream. It has the most exquisite flavor and pairs wonderfully with banana bread.”
06Fruity

This one is a bit obvious, but in the simplest terms, fruity ice creams taste like fruit. Some examples are cherry, strawberry, orange, kiwi, and so on.

E.g. “There’s no way you can tell me I’m not eating a fruit bowl right now. I was hesitant but I love the fruity taste.” 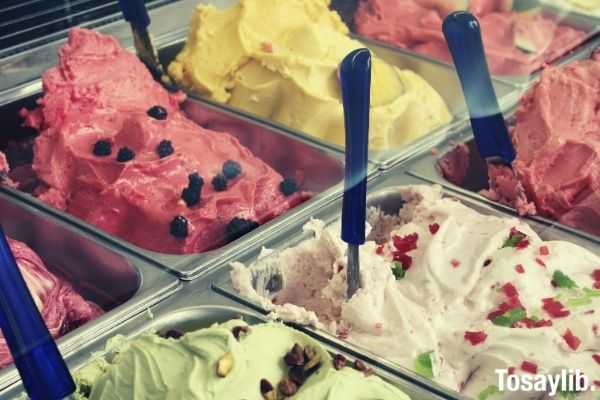 Homemade ice cream doesn’t usually taste the same as commercially made ice cream. There are fewer additives, and flavors are generally more prominent.

E.g. “I couldn’t tell that this ice cream was homemade by the looks of it, but the flavor reminds me of the buttermilk ice cream my mother made me as a child.”
08Nutty

The perfect example is pistachio. 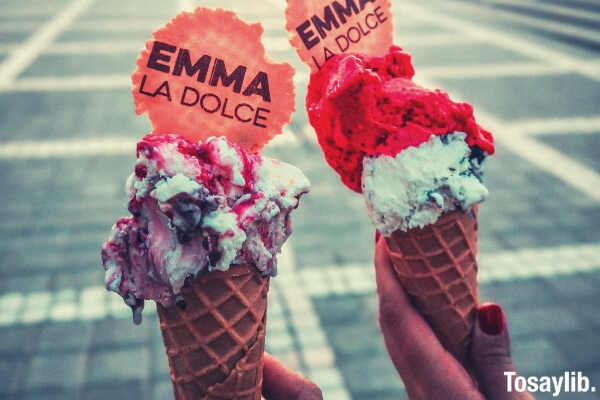 Plain is a good word to use for ice cream that isn’t very flavorful such as vanilla. You can also use it when you don’t wish to offend someone who hyped up its flavor.

Some ice creams are made salty, but most people who enjoy this type of ice cream are fanatics with sophisticated palates.

E.g. “I never thought I’d say this, but I might actually be a fan of salty ice cream. It’s different, but in a good way. “

25+ of the Best Words to Describe Taste of Food

Sour ice cream is just that- sour. It will have a slightly acidic taste like lemon or vinegar.

E.g. “My kids tricked me into eating sour ice cream, but I actually enjoy the flavor.” 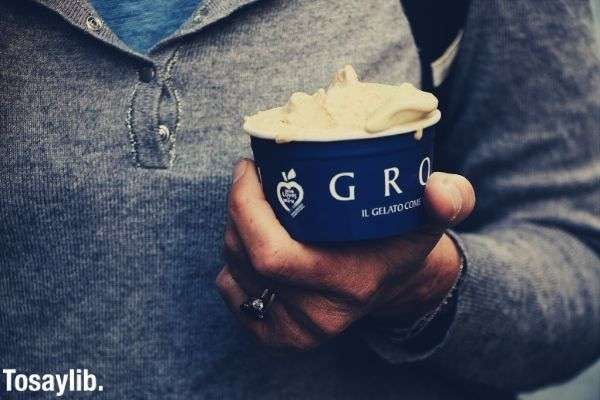 Sweet is the most common term that pops into people’s heads when it comes to ice cream and it’s undeniable that it’s true of most flavors.

So go ahead and use this word to describe your sweet, sugary ice cream.

E.g. “My favorite dessert is ice cream because it’s sweet and cold at the same time!”

Words to describe the look of your ice cream

They say you eat with your eyes and we agree. No one’s going to want to eat something that looks unpleasant.

The appearance of the ice cream is often a good indication of how it will taste.

Here are 8 words to describe ice cream based on its appearance:

Color is a good place to start when describing ice cream.

So if it’s pink, say it’s pink. If it’s a weird-looking purplish color, say that. It helps others to visualize it where a description of its flavor falls short.

E.g. “I thought this brown ice cream would be chocolate flavored but it’s actually walnut flavored. “

Image from Canva – under one-time use license
14Creamy

Creamy ice cream looks smooth and consistent. This means there are no additions like peanuts or pieces of fruit to give it an extra layer of texture.

E.g. “That bowl of ice cream looks so smooth and creamy, like it would melt right on my tongue!”
15Chunky

Chunky ice creams are those that are not consistent in appearance and have little chunks or additions such as nuts, cookies, or chocolate chips.

These add crunch, flavor, and texture.

E.g. “Chunky monkey ice cream is a must-have for binge-watching sad movies with your girlfriends” 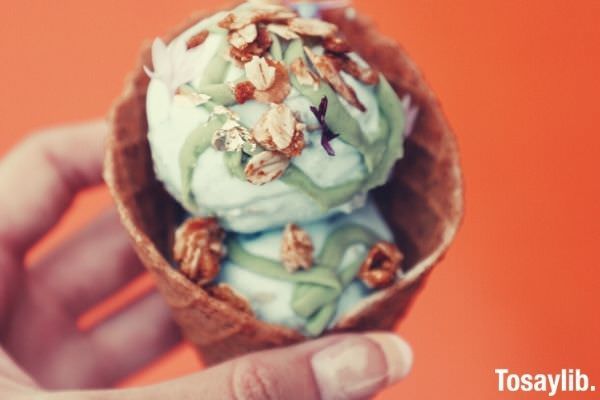 As yummy as it tastes, ice cream can begin to look disgusting when your four-year-old mixes the flavors together and puts random toppings on it. At this point, it becomes unappetizing.

E.g. “My sundae melted together and it looks sort of disgusting now.”
17Hard

Hard ice creams are those that have been in the freezer for a while and have solidified completely. This is easy to tell based on appearance and many people prefer their ice cream this way so it’s more satisfying to put on cones.

E.g. “I prefer hard ice cream because soupy ice cream simply isn’t as enjoyable for me.” 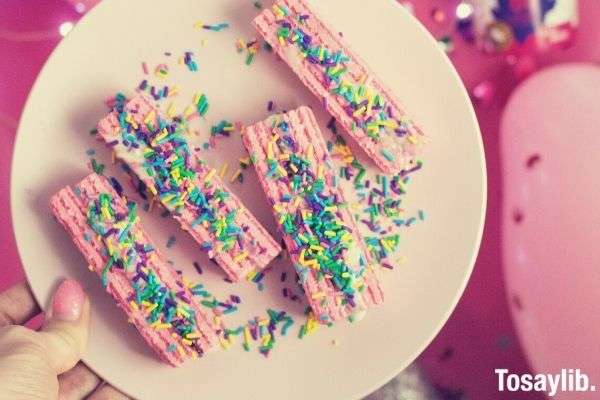 As we said, you eat with your eyes, so when you visit the ice cream shop, you get drawn to and typically purchase the one that looks most attractive, or inviting.

E.g. “I’m on a strict diet but that pint of strawberry ice cream looked so inviting I had to have some!”
19Soupy

As mentioned earlier, you can tell when ice cream is hard simply by looking at it. Soft ice cream is the opposite and is very melty and messy.

E.g. “If I wanted soup I would’ve ordered it. This ice cream is way too soupy to serve a customer”
20Tempting

Tempting is a good word to use especially when you know you’re not supposed to have it, but you want to anyway. One scoop isn’t going to undo all that progress you made, is it? 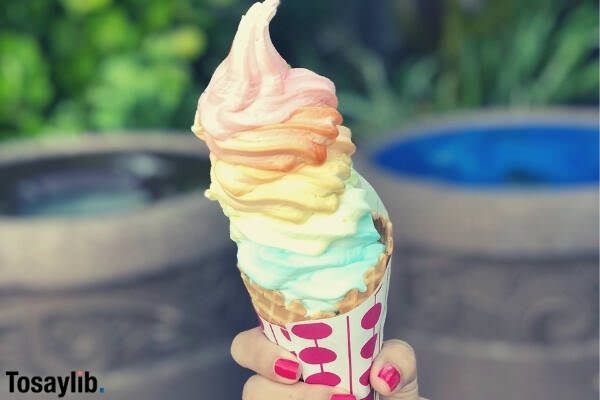 Ice cream is a guilty pleasure for a reason. It helps to brighten any day, whether it was a stressful day at work, a summer day spent doing yard work, or after a bad break up.

Here are 5 words to describe ice cream based on the feeling it gives or has:

Ice cream is a frozen treat, so of course, it will feel cool, but it will also cool you down.

This is a good word to use on a particularly hot day when the ice cream answers your prayers.

E.g. “Just what I needed. A nice, cool bowl of vanilla ice cream.” 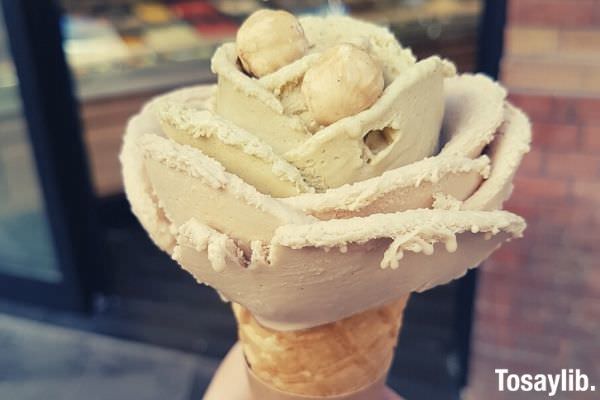 A glass of water might help to keep you hydrated, but ice cream will surely do the trick to refresh you and will make you feel good.

It is good to use when ice cream revitalizes or energizes you after the heat has started to wear you down.

E.g. “Watermelon ice cream is the most refreshing ice cream I’ve ever had. It’s not too sweet, but at the same time it isn’t bitter or flavorless.”

20 of the Best Words to Describe Chocolate for Chocolate Lovers

Maybe it’s because your parents took you for ice cream when you were on your best behavior, or simply because it tastes so good, but there truly is something rewarding about eating it.

E.g. “The most rewarding feeling in the world is when you take that first spoonful of ice cream, and before you know it, you’ve eaten the whole lot.” 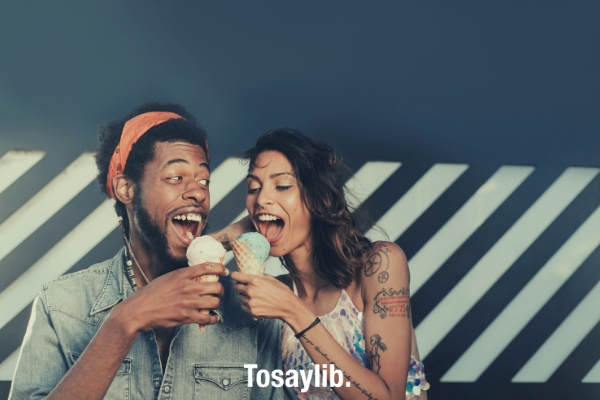 This is a good word to use to describe a very rich or flavorful ice cream that dances on your tastebuds and releases a blast of dopamine.

E.g. “I had the pleasure of visiting an old ice cream shop in London and got the most sensational ice cream experience in my life.”
25Soft

Soft ice cream glides onto the spoon easily and melts in your mouth immediately. If you touch it with your finger, it will sink right in.

E.g. “I think it’s ironic that ice cream can be so soft yet cold at the same time.”

Ice cream isn’t just ice cream. You’d know that if you have ever had good ice cream in your life.

And, when you’re ready to share your experience, you now have a list of 25 words to describe ice cream at your disposal!